This is a selective guide to some of the many resources available for Shakespeare Studies. This page will be your gateway to books, journal articles, video, and web resources. If you have any problems, just click on the Chat with me link, email me or just stop by my office. I'm here to help!

Here are a few other subject guides that will be of interest to you:

At the heart of Digital Theatre Plus is the ethos to share the best of British theatre with teachers and students all over the world. Digital Theatre Plus captures the moments before the curtain rises and after the curtain falls, providing valuable insight into the play making process. We share the hidden drama of the weeks, days, and hours before ‘lights up’ on stage. By revealing the world of the rehearsal room, dressing room, backstage and beyond, our documentaries and interviews introduce theatre as a vibrant, exciting art form through a familiar and accessible medium.

For generations, Shakespeare’s works have been performed, read and loved throughout the world. His plays have been reinterpreted for every new generation: as teen movies (10 Things I Hate About You/Taming of the Shrew), musicals (West Side Story/Romeo and Juliet), science-fiction films (Forbidden Planet/The Tempest), Japanese warrior tales (Throne of Blood/Macbeth) and novels (A Thousand Acres/King Lear), to name a few. The time is ripe for a dedicated series of stand-alone retellings that will form a covetable library as well as a celebration of Shakespeare for years to come. The Hogarth Shakespeare will be a unique series to delight existing Shakespeare lovers and bring the world’s favourite writer to a new readership, young and old.

The Hogarth Shakespeare programme will launch in 2016, coinciding with the 400th anniversary of Shakespeare’s death. This international publishing initiative is led by Hogarth UK and published in partnership with Hogarth US, Knopf Canada, Knaus Verlag in Germany and Mondadori in Spain; and Random House Australia, New Zealand, South Africa and India. The novels will be published simultaneously across the English-speaking world in print, digital and audio formats. Hogarth is currently in discussion with a number of writers, with further announcements expected soon.

Some of the writers already signed up are Margaret Atwood (“The Tempest”), Howard Jacobson (“The Merchant of Venice”), Anne Tyler (“The Taming of the Shrew”), Jo Nesbo ("Macbeth"), and Jeanette Winterson (“The Winter’s Tale”).  I can't wait to see what they do with the plays!

The Global Shakespeares Video & Performance Archive is a collaborative project providing online access to performances of Shakespeare from many parts of the world as well as essays and metadata provided by scholars and educators in the field. The idea that Shakespeare is a global author has taken many forms since the building of the Globe playhouse. Our work honors the fact and demonstrates the diversity of the world-wide reception and production of Shakespeare’s plays in ways that we hope will nourish the remarkable array of new forms of cultural exchange that the digital age has made possible. Global Shakespeares is a participatory multi-centric networked model that offers wide access to international performances that are changing how we understand Shakespeare’s plays and the world.

Journal of the Wooden O - Call for papers

The Journal of the Wooden O is a peer-reviewed academic publication focusing on all things Shakespeare. It is published annually by Southern Utah University Press in cooperation with the SUU Center for Shakespeare Studies and the Utah Shakespeare Festival.

The editors invite papers on any topic related to Shakespeare, including Shakespearean texts, Shakespeare in performance, the adaptation of Shakespeare works (film, fiction, and visual and performing arts), Elizabethan and Jacobean culture and history, and Shakespeare’s contemporaries.

Articles published in the JWO are indexed in the MLA International Bibliography, World Shakespeare Bibliography and appear full-text in EBSCO Academic Search Premiere.

Selected papers from the annual Wooden O Symposium are also considered for publication.

SUBMISSIONS: Manuscripts should follow the Chicago Manual of Style. The deadline for submission is October 15, 2018. Authors should include all of the following information with their submission:

Submit electronic copy to: woodeno@suu.edu (Only .doc, .docx or .rtf files will be accepted.)

In addition to Shakespeare’s plays (which are available in Folger Digital Texts), hundreds of works were written and performed during London’s first period of commercial theater, from 1576 to 1642. A total of 403 of these plays by other writers still exist in early printed editions. EMED provides a wealth of data on each of them, which you can browse or search online or download in a variety of formats.

EMED also includes full texts of a number of the plays in the original spelling as well as with some regularized forms. The textually encoded files are available, too. Whether you read the plays, discover new insights through data exploration, devise college and graduate curricula, or work toward scholarly editions, EMED widens our horizon to different plays and to new questions as we consider the drama of Shakespeare's time.

Shakespeare in Performance showcases rare and unique prompt books from the world-famous Folger Shakespeare Library. These prompt books tell the story of Shakespeare’s plays as they were performed in theatres throughout Great Britain, the United States and internationally, between the seventeenth and twentieth centuries. 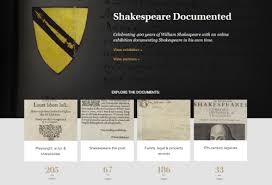 The Folger Shakespeare Library would like to bring to list members’ attention the launch of a new digital resource, Shakespeare Documented (shakespearedocumented.org), which brings together high-res images, descriptions, and transcriptions of all known references and allusions to Shakespeare, his family, and his writings, almost entirely from his own lifetime. Over 30 institutions contributed to the online exhibition, which is convened by the Folger Library. Chief partners include the Bodleian Library, the British Library, The National Archives, and Shakespeare Birthplace Trust.

The Sonnet Project is a completely crazy idea dreamed up by Ross Williams from NY Shakespeare Exchange. 154 sonnets, 154 NYC locations, 154 actors. It’s a tapestry of cinematic art that infuses the poetry of William Shakespeare into the poetry of New York City. It’s huge, it’s visceral and it’s right here.

We began this project as a continuation of our mission – getting new audiences to like Shakespeare.   After raising almost $50,000 in a Kickstarter campaign we embarked on a journey – to film all of Shakespeare’s sonnets, each performed by a different actor in a carefully chosen New York City location. It began as project with a deadline – by Shakespeare’s 450th birthday (April 23rd 2014) all 154 sonnets would be assigned, filmed and released on our website and YouTube.

The Sonnet Project very quickly blossomed into something more. It became apparent that each sonnet was not simply a ‘video’ – not simply an actor standing at a monument reciting a sonnet – but a short independent film. Every single sonnet required time and effort beyond our imagining. But the finished product! Each one is expansive, narrative – a work of art.

We decided to focus on the journey rather than the destination – the Project will not be finished by April. But that’s ok. In fact, it’s more than ok because the Project has exploded into a sprawling, barely controllable, ever-growing, ever-changing tribute to Shakespeare’s art, New York City, and the artists that live here. And we love it.

Click here to read the NY Times article about the project.

Early Modern Manuscripts Online, or EMMO, is a multi-faceted project funded by a grant from the Institute of Museum and Library Services(IMLS) that will provide scholars and the general public with convenient web access to a substantial number of English manuscripts from the sixteenth and seventeenth centuries. 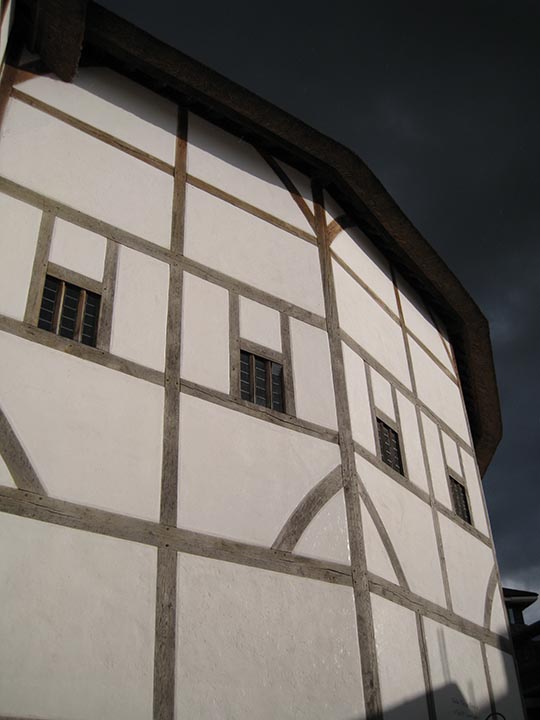 The New York Times is currently featuring Maximum Shakespeare: an online discussion of the playwright and his works.  It features interviews with actors and discussions about the challenges they face in acting Shakespeare.  It also has short videos of actors - currently featuring Orland Bloom and Samuel Barnett - speaking short speeches from the plays they are currently seen in.  Here is the link to the artilces: "Players, Here’s the Drill: David Harewood and Orlando Bloom on Shakespearean Warm-Ups" and "What Makes a Great Shakespearean? Mark Rylance and Other Standouts Share Secrets of the Trade."  Keep checking back as more content is added regularly.

The Database of Early English Playbooks allows scholars and students to investigate the publishing, printing, and marketing of English Renaissance drama in ways not possible using any other print or electronic resource. An easy-to-use and highly customizable search engine of every playbook produced in England, Scotland, and Ireland from the beginning of printing through 1660, DEEP provides a wealth of information about the original playbooks, their title-pages, paratextual matter, advertising features, bibliographic details, and theatrical backgrounds.

Editions and Adaptations of Shakespeare

Editions and Adaptations of Shakespeare includes the complete text of 11 major editions of Shakespeare's works, from the First Folio to the Cambridge edition of 1863-66. It also includes 24 separate contemporary printings of individual plays, selected apocrypha and related works, and more than 100 adaptations, sequels, and burlesques from the 17th, 18th, and 19th centuries. It is also an historical archive of Shakespeare editing. The major 18th- and 19th-century editions are included, providing a history of the scholarly foundations of the modern Shakespeare text. 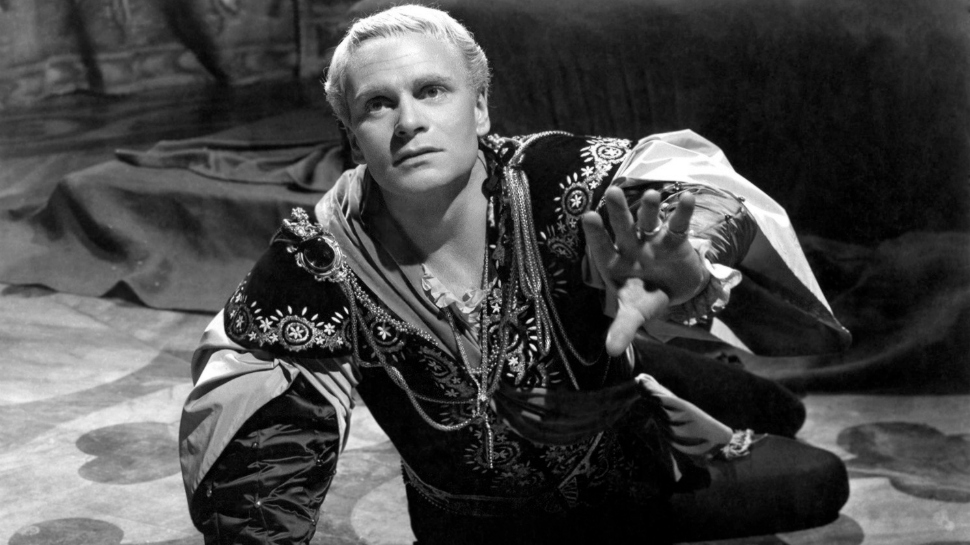 Can you name all the different words in Hamlet's 'To Be Or Not To Be' Soliloquy? Sporcle games provide mentally stimulating diversions. Check the site for the many games featuring Shakespeare's plays and test your Shakespearean knowledge!

The Mousetrap is a place for people to come together to share their love of the plays and poems of William Shakespeare. We are critical omnivores; there is nothing about which we cannot develop a reasoned opinion. But what we love most is sitting around with a glass of wine or a tumbler of bourbon and talking about the Bard. Or sometimes yelling about the Bard. Occasionally fighting about the Bard. And some of us know how to use swords!

But here at The Mousetrap we’re always civil, kind, and respectful, and we never type in all caps. We just want to share the joy and jealousy, the frustration and fascination as we investigate Shakespeare’s life and work. Anyone who wants to join in our exploration is welcome; We’re all here to learn.