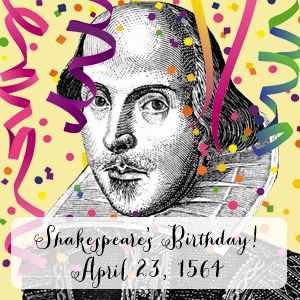 William Shakespeare was born on or about April 23,1564 in Stratford-upon-Avon, Warwickshire, England. Although it appears more likely that this was the date of his baptism rather than his birth, April 23rd has been widely accepted as Shakespeare's birthdate. Shakespeare was an actor, poet, and playwright who is recognized as one of the world's most celebrated dramatists.

Every year, around April 23rd, the town of Stratford-upon-Avon celebrates Shakespeare's Birthday with a huge party. The event incorporates music, performance and a parade through the town featuring Morris dancers and local singing groups.

Although the celebration in Stratford-upon-Avon has been canceled for this year, we can all still celebrate Shakespeare's life and works electronically through the many resources we have available to us. This guide will assist you in locating Shakespeare's plays in print and performance, as well as scholarly works about his plays, his life, and the time he lived in. Enjoy!

Are you up for a challenge?

Sir Patrick Stewart is currently reading Shakespeare's sonnets on his Instagram account - we would like to challenge you to get your Shakespearean on and give it a try as well!  Read a sonnet or a short soliloquy from one of Shakespeare's plays and post it to your Instagram page with the hashtag #ShakespeareChallengeNYU and let your inner actor shine!