Inspired by Archives, Tandon Grad Celebrates Early Black Engineers in His Own Fashion |

When Joel Ureña (oo-rain-ya) completed his first year at the NYU Tandon School of Engineering in 2017, he took a summer job in the Bern Dibner Library—an experience he sees as transformative. How transformative was it? Well, for one thing, his position at Dibner led him to become a clothing designer.

Ok, let’s back up. Ureña, a proud Bronx native (198th and Grand Concourse to be exact), graduated in May 2020 as an Opportunity Programs Scholar. He majored in Integrated Digital Media and a minor in Computer Science. From the summer of 2017 until 2019, he was the lead student assistant at Dibner. Members of Dibner’s leadership team were so impressed with his contributions to the library that they nominated him for a 2019-2020 Digital Library Fellowship from the Association of Research Libraries, which he won.

For his fellowship project, Ureña immersed himself in the Poly Archives, which hold records of the founding and history of the Brooklyn Polytechnic Institute, now NYU Tandon. Acting on a suggestion from a Tandon advisor, Ureña delved into the archives at Dibner and found an early edition of the Polywog, the school’s yearbook from 1887 to 2009. Inspired by a photo of Darnley E. Howard, class of 1921, one of the first three Black students at Poly, Ureña excitedly combed through every issue.

“I began finding incredibly compelling images of Black and Latinx engineers,” he said. “Seeing so many student engineers of color at work, using highly specialized lab equipment, was awe-inspiring. If you look at admissions marketing for engineering schools, you don’t often see Black and Brown faces. I wanted to surface that imagery and show a reimagined engineer during that period.” 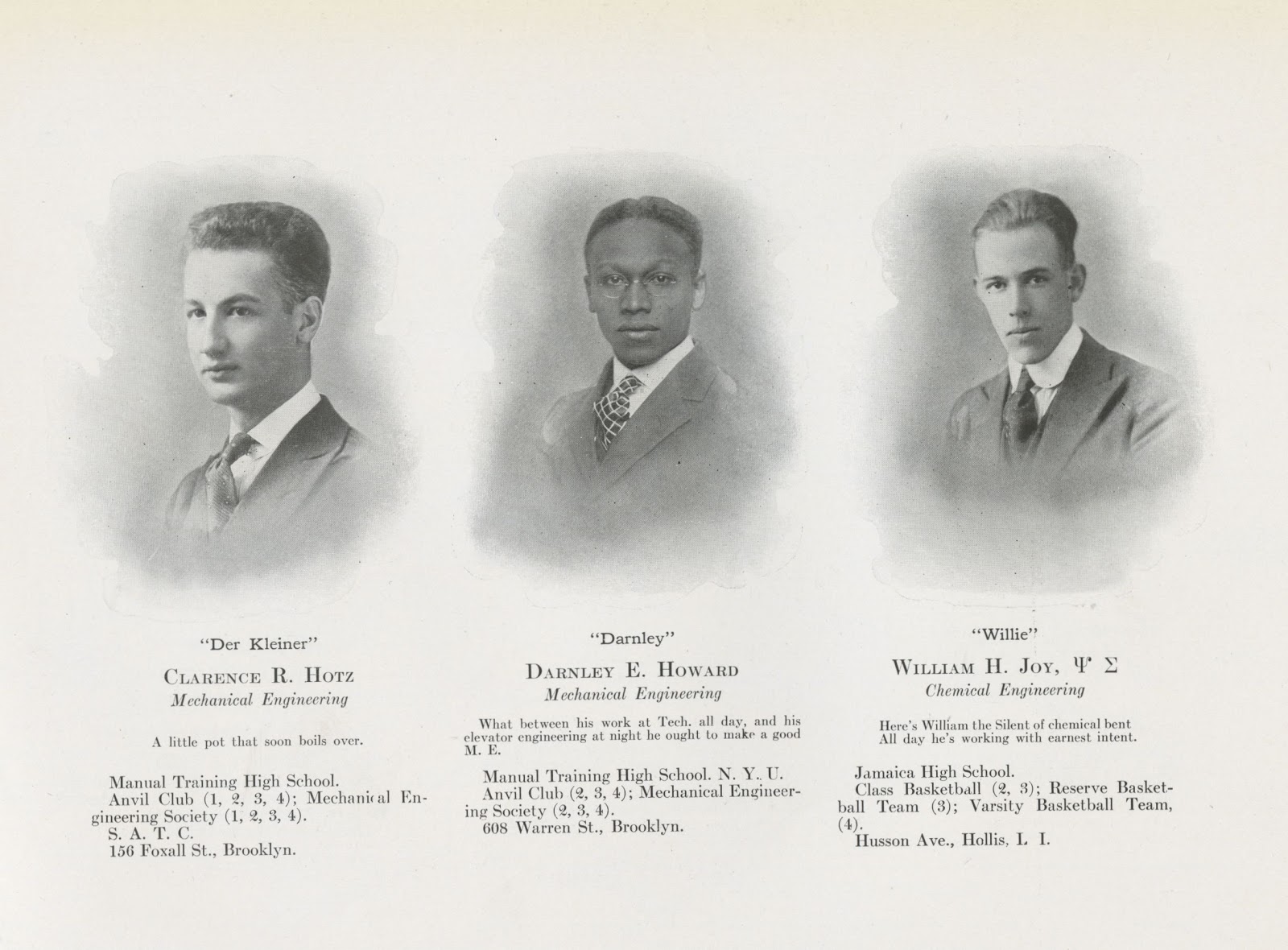 Ureña knew he wanted to create a multimedia project—a physical collection with a digital component to give it context. He began to picture Darnley E. Howard (photo center left) once again striding across campus—this time in a hoodie. From this imagery, the Polywog Collection was born.

Ureña does not envision a career in fashion. His Polywog Collection business plan calls for handing off the apparel, imagery, source files, and all logistics information to the Tandon chapters of the Society of Hispanic Professional Engineers and the National Society of Black Engineers to use for fundraising; perhaps to send students to conferences.

Ureña had begun contacting vendors in Brooklyn for apparel-printing estimates when COVID-19 shut us all down. Pivoting, he created the Polywog site (photo below). The website houses a rich collection of vintage photographs, images of the clothing he envisioned, and an artist’s statement, including the hope that others will be inspired to “create, remix, transform and share these materials.” The Polywog Collection served as Ureña’s senior project and won Best Senior Project in Integrated Digital Media from the Technology, Culture, and Society Department. 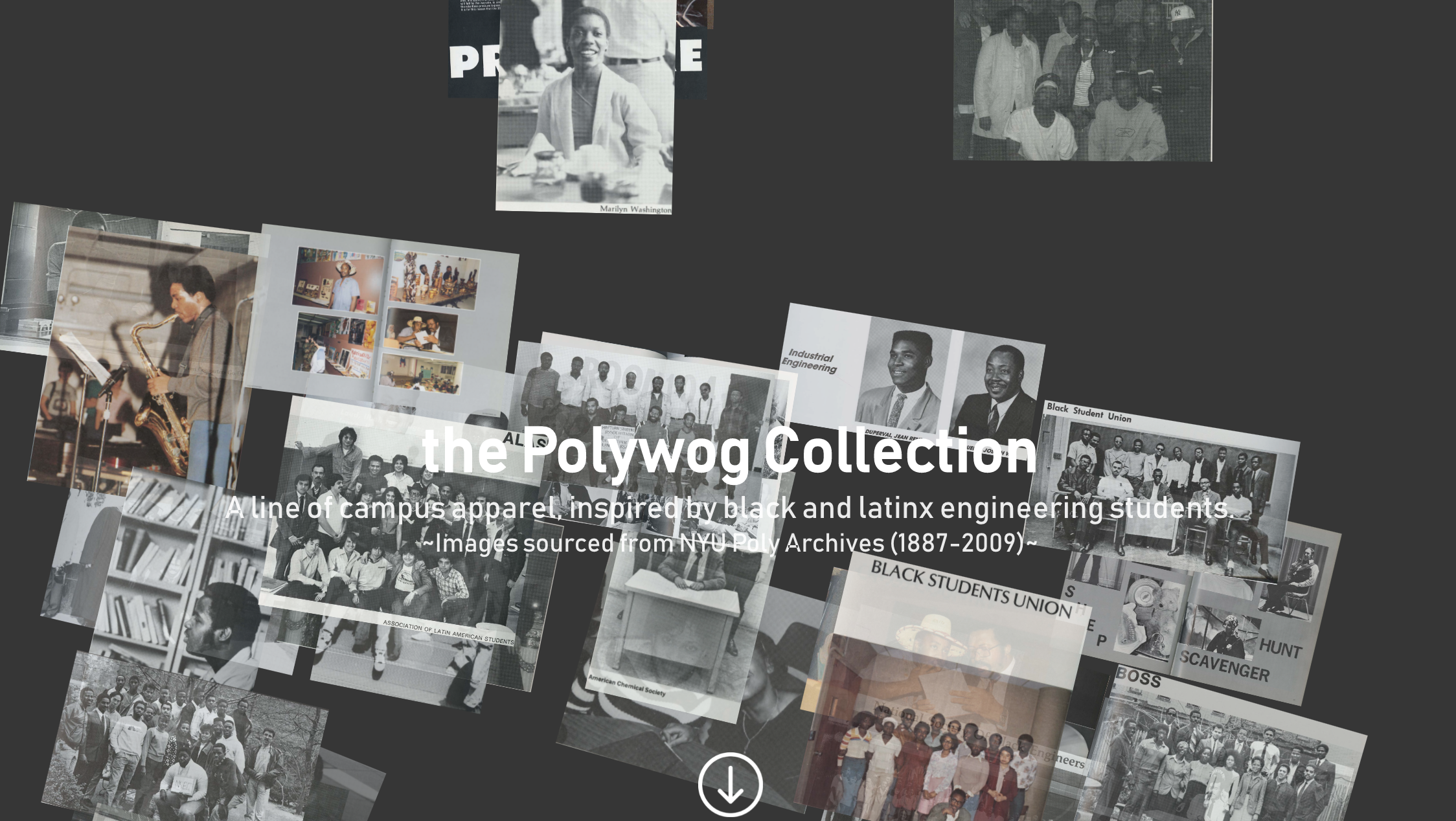 Just before graduating, Ureña accepted a position as product associate at Patch.com, a hyperlocal news provider. Still, he remains connected to his alma mater, and on the Polywog site he speaks directly to the Tandon community:

“I hope that Black and Latinx students at NYU Tandon see this project and know that their legacy in this institution is eternal. [Students] come out of Tandon joining a hallowed group of engineers who have impacted the world through their research, reshaped industries, and strengthened their communities.”

Enter your e-mail address to receive notifications of new posts by e-mail.