A resource guide for the study of Comparative Literature.

These online collections include primary sources (some with searchable text, some with page images), bibliographic information, biographical information, cultural and historical contexts for literature, and more. Access is limited to NYU community members.

These online collections include primary source materials, cultural and historical contexts for literature, and more. These resources are available on the open web, and do not require an NYU login.

Can't make it to the library? Ebook Central to the rescue! Ebook Central contains more than 40,000 full-text books in a variety of subject areas. You will have the ability to search, highlight, annotate books on Ebook Central as well as print or download portions of the texts. 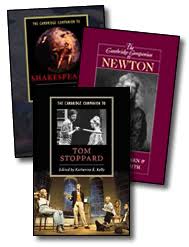 Cambridge Companions Online offers subject or theme based collections of content within a richly functional, fully cross-searchable online environment.  All of the fabulous resources of the numerous Cambridge Companions are available to you through this resource.  The Companions feature authors and theorists including: Shakespeare, Nabokov, Hemingway, Adorno, Benjamin, Marlowe, just to name a few.  You can view individual volumes, individual essays, and the rich bibliographies that are included within each publication.  Each collection is updated with new Companions on publication.