This guide will point you to the best places to find books, articles and other sources of information for your Political Science courses.

Primary sources are firsthand accounts, original documentation, artifacts, artworks, or media produced during or close to the time period of an event. A growing number of primary print and microfilm resources relevant to the political sciences are now available in digital format either free online or in subscription databases. Although the types of primary sources used for research will vary depending on the need, the following are examples of widely used primary documents in the political sciences:

Government-issued publications serve as important primary source records of government proceedings. However, not all government publications should be interpreted as primary sources. For example, the following two government documents provide information about the Nuremberg War Trials, in which former leaders of the German Nazi party were indicted and tried as war criminals between 1945–46. 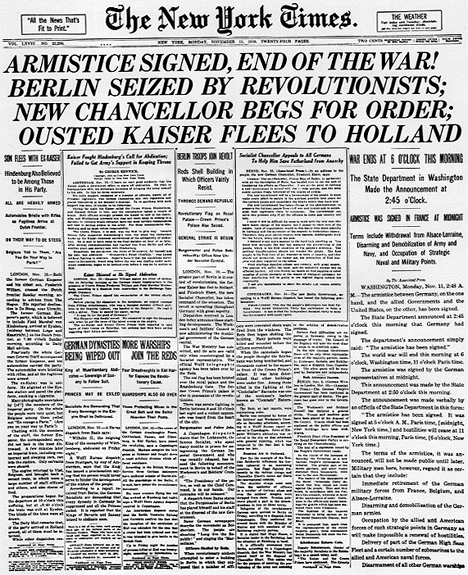 Newspapers such as the New York Times or Washington Post provide an in-depth analysis of topics and issues. However, newspaper articles rarely cite their sources and your instructor may not consider them primary sources for scholarly research assignments.

An exception to this general rule is the use of "historical newspapers". Historical issues of newspapers that detail important political events at the time of their occurrence are often considered acceptable primary sources for cited scholarly research.

For example, The New York Times article to the right provides details of the armistice between Germany and the Allies that ended World War I. It was published the day the armistice was signed, November 11, 1918, and is a primary source document of the event.